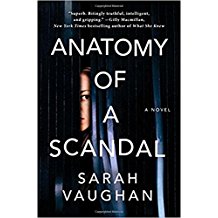 Anatomy of a Scandal reads like a story ripped from today’s headlines: a prominent man is accused of sexual harassment. I couldn’t put the book down—I actually felt edgy when I wasn’t reading it, almost like the story was an addiction.

Taking place in England, a tall, handsome, charismatic politician named James Whitehouse, a man from the upper echelons of society, is accused of raping one of his parliamentary researchers. Most of the novel centers on the trial while in between there are flashbacks from his youth at Oxford University. Unbeknownst to him, the prosecuting attorney, Kate Woodcroft, who is from a working-class background, spent her first year of college at the same school and remembers him well. The reader soon realizes how well and why this case now dominates her life.

The defendant’s wife Sophie also plays a pivotal role. She too attended the same university at the same time her husband and the attorney did and she is also from a privileged background. The novel focuses on her feelings about her husband and whether she will stand by him and keep their family intact.

What struck me most about the novel was the superb writing. Author Sarah Vaughan’s use of language and the story’s editing were top-notch. The pacing was also phenomenal, making it difficult to put down—as a reader, I always wanted to know what was going to happen next.

The topic of sexual harassment is timely, and from reading the story, I couldn’t help thinking about how men and women can take measures to avoid this situation in the first place as well as how to prevent a working relationship from going a step further.

For all the book’s merits, author Vaughan relies on the stereotypical one-dimensional wealthy, privileged man feeling entitled to commit despicable crimes without remorse. In reality, their psychological make-up is often far more complex. The female characters are much more sympathetic and relatable. The topic of sexual harassment is not going away and unfortunately, the very nature of the “he said, she said” crime makes it immensely difficult to prosecute. In order for the accused to be declared guilty, the evidence must prove a crime has been committed beyond a reasonable doubt. A tough case all around, yet its complexity makes Anatomy of a Scandal a compelling read.