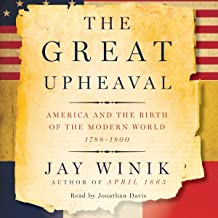 For history lovers, The Great Upheaval: America and the Birth of the Modern World 1788-1800 is a must read. Author Jay Winik guides readers through the major events of this pivotal global turning point. The American Revolution’s ideals of freedom and liberty were felt over much of the world. Motivated to strike a blow to England, his country’s enemy, King Louis XVI of France helped finance and support the revolution, sending troops like the famous Lafayette, At the same time, the enlightened Catherine the Great of Russia initially pursued these ideals and embraced the enlightened philosophies of Voltaire as well as prominent Russian reformers like Alexander Radishchev and Nikolay Novikov. Ironically, the revolution also inspired French radicals, who overthrew and then beheaded King Louis, resulting in France embroiled in a bloodbath of violence and anarchy.  As for Catherine, when the progressive ideals of freedom and independence threatened her authoritarian monarchy, she promptly crushed it, imprisoning Radishchev and Novikov in a major turnabout. Both Lafayette and Tadeusz Kosciuszko, a statesman and national hero of Poland, fought in the American revolution but failed to achieve similar reforms in their respective countries –Lafayette was forced to flee the violence of France and Kosciuszko’s valiant attempts to free Poland from Russia’s tentacles failed.

Winik’s book is very readable, consisting not simply of dates and names. He relates the story behind the events and examines the lives of the major players. As an example, this book only heightened my respect for America’s first President, George Washington. In a time of reigning kings who ruled for life, Washington made the historic decision to step down after two presidential terms despite Americans’ plea for him to be crowned king. There were great minds at the country’s inception  –Jefferson, Franklin, Hamilton, and Adams immediately come to mind, but it was George Washington who utilized the best of their ideas and rose above their clashes in ideas and personalities, demonstrating  that this country provided a template for democracy all over the world during a critical time of turbulence and change.

My recommendation: Read, learn, and enjoy.