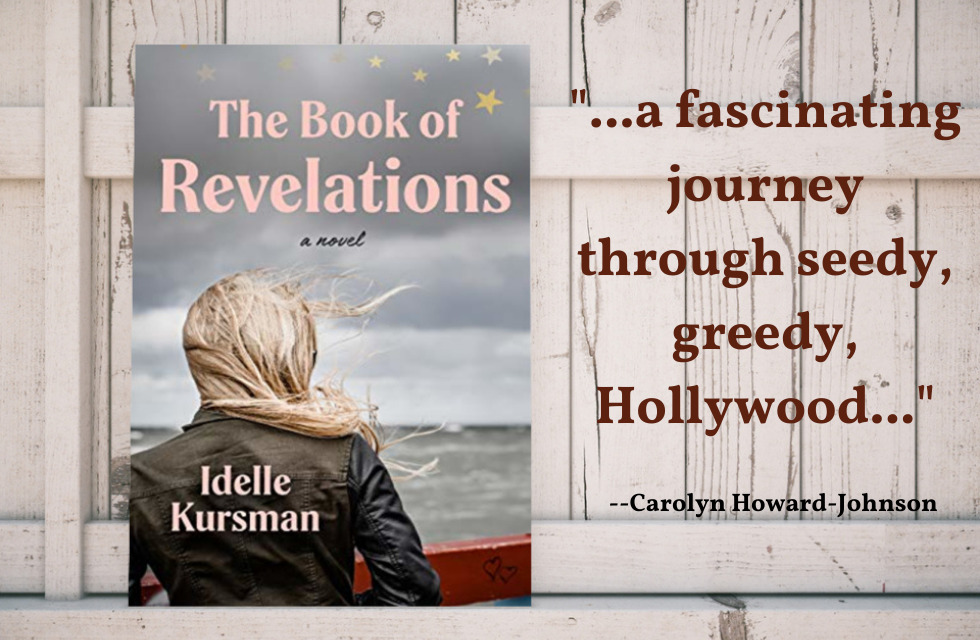 The past is over and forgotten. Or is it?

Christine Goldberg has finally achieved a good life after years of upheaval. She has a loving husband, great kids, and a steady job at a Boston modeling agency. Though still struggling to overcome her parents’ disappointment and her own feelings of failure, she tries to focus on all she has now.

But Christine’s comfortable life is about unravel as Ryan Monti, an ex-boyfriend she hasn’t seen in years, reenters her life.

Ryan, now an A-list Hollywood actor, is a self-centered playboy who treats women as nothing more than arm candy. He is committed to one thing: finding the career-defining role that will win him an Oscar. That is, until a shady blackmailer threatens to expose his past.

When the blackmailer’s machinations bring them together, Christine and Ryan will be forced to reckon with their history. Will either be able to rise to the challenge?

“Kursman takes us on a fascinating journey through seedy, greedy Hollywood to get to the expected Revelations in a book readers are not likely to forget.” —Carolyn Howard-Johnson, award-winning writer of fiction and poetry

As Christine entered the office, Linda came rushing over to her, her eyes dancing, her cheeks pink, and her smile wide.

“Christine, you’ll never guess,” she whispered loudly while hurrying over to her. “A big actor in Hollywood made an appointment to see you! Ryan Monti! Can you believe it? First thing this morning! Oh my, I can’t… he’s a little late,” she said, glancing at the clock, “but that’s OK. You’re just a few minutes late too. No problem.” She waved her hand. “You go into your office and get ready. Sophie has an early meeting today. After she’s done, she’s coming over here to greet him.” Her hand went to her chest and then both her hands fluttered to her cheeks. “Oh my! This is so exciting! Wait until my family hears about this! After he meets with you, I’m hoping to get a picture with him!”

As she rambled on, Christine stood there woodenly. When Linda finally finished gushing, she mindlessly headed to her own office, where her assistant was too excited to notice her expressionless face.

Ryan was beside himself. He could think of nothing else to do but go back to his penthouse and think. He wished he could quell his rapidly beating heart. His head was swirling with worries and fears. What if the money doesn’t come in time? What if the machines go down at the bank?

He had never felt this uptight, not even when preparing for a movie that was considered a box office risk. He tried pushing aside a creeping thought that he didn’t know if it was a real or imaginary premonition: that evil little man was watching him everywhere he went. He paced around the parking garage, but no ideas came to him. Upon returning to his car, he drove down the street, but after a few miles, he parked his car on the side lot of a gas station. His cell rang. Ryan sped to answer it in hopes it was Buddy or someone who would give him a solution.

In The Book of Revelations, Christine Goldberg has struggled for a large part of her life to get to the successful point she enjoys today, with a family, a good job, and security. All this is threatened by the emergence of an ex-boyfriend who is in search of the apex role in his acting career, the only thing that thus far has remained elusive to him.

Ryan Monti is fixated on his goal, shallow, self-centered, and a part of her past that Christine didn’t want exposed. He’s also successful. His success hasn’t led to contentment, but to an obsession which has led him to being considered one of Hollywood’s shining stars.

When blackmail enters the picture to complicate Ryan’s life, his uncertain relationship with girlfriend Megan, and his reconnection with Christine, it throws them both together despite their feelings about the past, and everything begins to change.

Idelle Kursman builds a fine story where the past intersects with the present in two very different lives and personas. She paints a fine portrait of Christine, who faces life with the professional demeanor of a businesswoman with more savvy and independence than her younger self; and Ryan, whose personality hasn’t veered much from his obsessions and uncertainties even as he’s cultivated uncommon success in his life.

Ryan’s feelings about reporters mirrors his casual use-them-and-drop-them attitude about everything in his life, from his girlfriends to his colleagues: “Ryan had no real relationships with other journalists or anyone else in the media. He considered them a nuisance and always tried to avoid them by wearing a hat, sunglasses, and nondescript clothing in public.”

At first, it’s hard to see the connections between these two disparate individuals aside from their early encounter. The surprise lies in their evolution and shared revelation over a closely-held secret that holds the power to change Ryan’s life like nothing else. Ryan grows and changes throughout the story, finally developing into the man he should have been all along.

The Book of Revelations explores different kinds of revelations, confrontations, and changes. It considers how one door opens as another is still closing, and explores changed concepts of family connections, trust, and truth.

Readers interested in a chronicle of lies, truths, and revised lives will find The Book of Revelations an emotional ride into the choices and consequences of two disparate individuals who find their lives coming full circle in unexpected ways. It’s highly recommended reading for those who like to see their characters evolve later in life, and for readers who know that no story is set in stone until the end of life. —Donovan’s Literary Services

It has been awhile since I read a book I “just couldn’t put down”, but I found one in The Book of Revelations by Idelle Kursman.

This can easily be read as a stand-alone, but will be greater appreciated if the reader first reads True Mercy. This is a continuation of the bittersweet tale of three key characters.

Christine had been blessed. Having birthed illegitimate twins, she had some financial support from her parents and low paying jobs, when the twins were very young children, a very good man married her and was such a great husband and father. She now enjoyed success in a job she enjoyed. Life was good, she could deal with any problem, or could she?

The characters are very endearing and seem so real. The scenes are portrayed well and easily visualized. This poignant tale is very emotionally captivating. It has several great morals in this story. —LAWonder10, Book Review, Rockin’ Book Reviews

Kursman pens a magnificent story in The Book of Revelations. I have read work from this author before, and I really enjoyed it. The characters were intense and very intriguing. This book deserves a second read! (and maybe more). The thrills and intrigue is written clearly and the characterizations are engrossing. It’s a powerful read, and so intense, with both heart break and heart fulfillment. This definitely kept this reader turning the pages. It’s a great story to follow and try to figure out what will happen next. This author’s characters develop and interacts well with the other characters. I have fast become a big fan of (this author). I look forward to reading more by this author. This book is a definite recommendation by Amy’s Bookshelf Reviews. —Amy’s Bookshelf Reviews

This book gave me all the feels and literally had me sobbing at points, you can imagine when I am sure if you have read it.

The book follows Christine Goldberg who seems to have it all, wonderful children who are doing well at school, a fantastic job at a top modeling agency and a loving husband. However, one set of bad news seems to lead to another and Christine is left facing ghosts from the past.

The book also follows Ryan Monti, an A list celebrity famous for his acting roles and the line of women he seems to make his way through. He blames this on his lifestyle but as the story goes on, we realise there is more to the story than meets the eye.

The author weaves these two characters from worlds apart together seamlessly and I really enjoyed the alternative viewpoints. Although I quickly worked out some of the main connections, this didn’t take away from the story and I found it very hard to put this book down once I got started! The characters were written with depth that is sometimes lost in favour of a storyline; however, here you got both! —Highland Book Fairy, Scottish Book Blogger