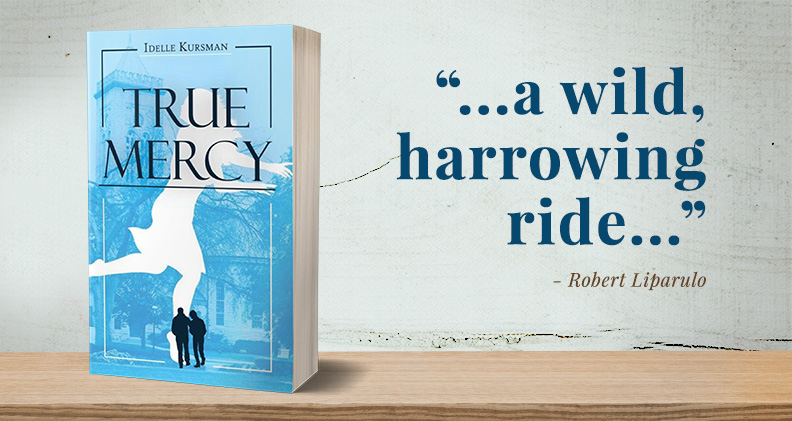 Danger lurks everywhere for Marina. When the ship carrying her and other human trafficking victims from Europe arrive at a port in New Jersey, Marina manages to escape and wants nothing more than to be rid of her traffickers and free the other women. But one of the underground organization’s vicious henchmen will stop at nothing to recapture her. Marina scarred his face on the ship and now he only desires to inflict the cruelest death possible on her. She is doomed until an unlikely pair come to her aid: a young man with autism and his widower father. Still reeling from the death of their mother and wife, son and father encounter her by chance and all three become caught up in the powerful tentacles of an international human trafficking ring. Will the henchman succeed and destroy all their lives? Will relentless evil triumph in the end?

“From the first page of True Mercy, I knew I was in for a wild, harrowing ride of a story. Thankfully, author Idelle Kursman is up to the task; she is a true storyteller and wordsmith.”

—Robert Liparulo, best-selling author of The Dreamhouse Kings, The Thirteenth Tribe and The Judgment Stone

She heard the engine slowing down, figuring the ship was moving toward shore. Amid the roar of the splashing waves, she noticed the moon shone like a glowing lantern in the air through a small porthole window. She shuddered, recalling the last time Igor had said the ship was docked, he meant they would be unloading the girls. Marina refused to allow her mind to think about the horrors that awaited them.

She had become so thin she was able to slip out of her chains. Marina waited until she was confident her captors were sleeping. Earlier in the day she had overheard them talking about all the work they would have to do soon. Since then she wondered where they were and how the girls would be tortured. She pictured a dark, dirty place far from where anyone could hear their cries.

Marina strained her ears to hear the approaching footsteps or smell the stale whiskey of the night guard. Nothing.

Is this my chance? she asked herself. Images of Igor’s steely-eyed look of pure hatred assailed her. If she didn’t escape now, any day he would wreak a terrible vengeance on her for scarring him with his own knife. She could tell every time she saw him that inside his head he obsessed over finding the right moment to finish her off.

Was he there earlier?

She would have screamed if she had the energy. Unable to stand, Marina struggled to crawl away amid the branches and twigs. When she looked back at him, his head stirred and his arms moved.

When he opened his eyes, he shook his head in bewilder­ment and opened and shut his eyes. He spotted her and leaned forward to get a better view.
“Hi,” he said.

Terror filled Marina’s oval-shaped blue eyes. She backed away. When a large oak tree prevented her progress, she leaned on it, using all her strength to rise. She panicked when she looked back, for the young man had now risen to his feet.
“No! No!” Marina screamed. She wished she had some­thing heavy to throw at him and then run for her life.

“Whatsa matta? Why’re you mad? I didn’ even touch you,” he said, staring at her while she struggled to remain standing and leaning on the tree. He approached her and lifted his hand like he wanted to shake hers.

Marina searched around furiously. She didn’t know how many people were there. She breathed so heavily she thought she would faint. What if she were trapped? She stumbled to the ground as she tried to run. Realizing escape was impossi­ble, she started crying.

“Why’re you cryin’?” he asked, turning his head slightly in curiosity.

Marina didn’t hear him. She slumped on the ground and lay sobbing, her face closed in resignation, awaiting the worst. After awhile, she realized the man hadn’t come clos­er. She stopped sobbing and breathed heavily. Slowly, she looked up.

The man approached, extending his right hand while his left hand waved near his head. She noticed he had large hands for a man with a slight build.

“I’m Adam,” he said slowly. He had a blank, innocent expression in his large, round, brown eyes.

Marina studied him. He wore faded light jeans with a broken belt loop. His red T-shirt was half tucked in and half tucked out.

True Mercy by Idelle Kursman is a riveting and suspenseful thriller about a girl’s attempted escape from modern slavery. It was early morning in Chisinau, Moldova and Marina was on her way to the station to catch a train. At the quiet and empty station, a stranger approaches Marina and forcibly shoves her into a waiting car. For the next six months, Marina is on a ship, chained up with several other women. They are brutally beaten, raped, and prostituted from port to port across Europe. Seizing an unprecedented and unexpected opportunity to escape, Marina is surprised to find herself in the United States. Starving, frightened and unable to trust anybody, Marina seeks refuge in a park-like area in a residential neighborhood. Unexpectedly, Marina receives assistance from an unusual source. A little leery, but grateful, she accepts the proffered help. But with dangerous men seeking vengeance and hot on her trail, has Marina endangered everyone’s lives by receiving aid and shelter?

True Mercy by Idelle Kursman is a spellbinding novel that starts in Eastern Europe and makes its way across to America. Once you pick it up, you can’t put it down. It is an amazing depiction portraying victims of sex trafficking. The main character’s scramble to survive and be free again is heartrending. The author has done an excellent, but a disturbing job of capturing a very real nightmare that is operating across the world. Not only has the author featured human trafficking, but Autism also plays a major part in the storyline. It is a marvelous representation of the difficulties related to this spectrum disorder, rendering the characters lifelike and relatable. The unconventional conflicts gave the story a fascinating balance between good and evil. This remarkable and breathtaking novel keeps the reader in suspense to the final pages. It is a stunning novel and I am looking forward to reading more of Ms. Kursman’s work.

“From the first page of True Mercy, I knew I was in for a wild, harrowing ride of a story. Thankfully, author Idelle Kursman is up to the task; she is a true storyteller and wordsmith. Whether hurling the reader through fast-paced action, crafting fascinating characters-the kind worth rooting for, as well as the make-your-skin-crawl variety-or structuring a plot that’ll give your fingers paper cuts from flipping the pages so fast, Kursman’s talent will pull you in and leave you gasping for breath. True Mercy is a powerful, entertaining read and will put Kursman on your shortlist of go-to authors.”

—Robert Liparulo, best-selling author of the Dreamhouse Kings, The Thirteenth Tribe and The Judgment Stone

“A nail-biting journey through the sex slave trade. Readers will cheer for the courageous Marina and her unlikely rescuer, Bruce.”

“It isn’t every day that one of the central characters in a thriller story is autistic; but True Mercy pairs a widowed father struggling with his autistic teen son with a discovery that places both in danger, tossing them squarely in the world of a human trafficking ring, and uses autism’s special challenges to provide an extra twist in an engrossing saga.

Marina’s escape from the ring has been miraculous, and her stumbling into the yard of Adam and his father is another stroke of good luck for her. Her involvement with Adam and his family will change not only her life, but theirs.

Adam’s autism is realistically portrayed in a saga that moves between ‘voices’ and perspectives, but keeps them easily identifiable, unswerving, and powerful through clear chapter headings.

Adam’s emotions are plainly explored (“In the midst of happy memories of licking the chocolate chip cookie batter while his mother checked the cookies baking in the oven, Adam spotted a woman on the ground. He was afraid she was dead. On nature shows he occasionally saw an animal lying dead on the ground, still and lifeless. But before he panicked, he saw her thin, delicate fingers move…He stood staring at her, shaking his sweaty hands in the air and looking around. He was told to never touch a woman except to shake her right hand.“), providing an unusual take on events that transpire. Even the perspectives of those involved in the human trafficking operation are revealed: “In a rare occasion, Andre failed to keep in mind that the weakest employees had the potential to bring down his entire operation. This time he allowed Vladimir sole authority to make the hiring decision; Vladimir’s instincts were usually right on target.“

It’s these personal touches throughout that make True Mercy more than a story about human trafficking, but a saga of the human heart and a family’s special challenges.

Against such a backdrop, Adam and his father’s relationship unfolds. Adam isn’t just a tertiary adjunct in the story: he’s one of the central characters, who comes alive and stays alive throughout the process: “Where’s Marina, Daddy? Where’s Marina?” Adam asked endlessly as he stared out the front window, his hands waving. The more he asked, the more vigorously his hands waved, signaling his growing impatience.“

A touch of evolving romance enhances an exceptional thriller which includes subtle, wry humor injected at unexpected moments, a logical progression of events and encounters between characters, and a moving story of healing and mercy that is far more emotionally-driven than an action read usually provides.
Readers who look for more than casual psychological depth in their thrillers will find True Mercy a revealing, involving story.”